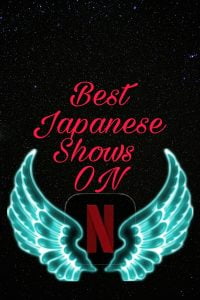 Best Japanese shows on Netflix: Including movies and series with subtitles

Below is a list of the best Japanese shows on Netflix. The results are on the basis of critics’ ratings and the polls done over the internet by GOOGLE and other media review houses.

It is a TV show based on Manga. And won the 55th Shogakukan Manga Award. If you are not aware of Manga. You can visit here for more details. It is based on the manga series Shinya Shokudo. Midnight Diners is all about patrons of a mundane Japanese diner. It is based on the love for a particular dish and good cooking shows on Netflix. A scarred man who operates during midnight diner in the streets of Shinjuku. No one knows him or his story, but his customers did what he really deserves. If you are looking for Midnight Diner on Amazon you can visit Here.

Final Fantasy revolves around Akio Inaba (Yudai Chiba) who interacts with his retired father Hirotaro (Ren Osugi). He (Akio) tries the relation through an online role-playing game Final Fantasy XIV. Akio was thinking to connect with his father in the game. If you are looking for the Final Fantasy XIV: Dad of Light on Amazon, you can visit here.

It is basically one of the best Japanese shows on Netflix which is based on a science fiction thriller drama, released in 2020 based on Manga. Directed by Shinsuke Sato, the series stars Kento Yamazaki who is a gamer, and Tao Tsuchiya who is a mountain climber. As allies, they were trapped in Tokyo and were forced to compete in dangerous games. After surviving their first game, players receive “visas,” and were given more difficult tasks in-game to compete. Now their aim is to avoid the expiry of visas. Expiry of visa results in facing red lasers being shot from the sky. If you are looking for Alice in Borderland on Amazon, you can visit here.

Samurai Gourmet is the story of a 60-year-old Japanese (Naoto Takenaka as Takeshi Kasumi) who were newly retired. And still figuring out what to do after retirement. Takeshi started to rediscover his passion for life and food.

A detective from Tokyo visits London for his missing brother, who’s been involved with the Yakuza and accused of murder. If you are looking for more related to Giri HAji on Amazon you can visit here. Best Japanese shows on Netflix continue.

Haruta Soichi is a 33-years-old single man who is not popular among women due to his poor social skills. He was called an unromantic person. He lives with his parents and works at a real estate office. However, one day, his mother left him and he has to live alone. Soichi doesn’t know basic household activities like cooking or washing clothes. He then decides to live with Maki Ryota, who is good at housekeeping and that too is an office colleague. One day, Ryota and Kurosawa Musashi (coworker) show their feelings for him. Unfortunately, both the coworker were gay. If you are looking for Ossan’s Love on Amazon you can visit here.

It is the story of people living in Tokyo who are influenced directly or indirectly by social media. Rimi Nara (Miki Nakatani) and Natsume Hyakuta (Elaiza Ikeda) came to Tokyo to become an actress. It was looking easy to them but was actually not that easy.

Demon Slayer is a Japanese anime TV series based on the manga, written and illustrated by Koyoharu Gotouge. It is basically a story of revenge taken by Tanjiro. As his family was slaughtered. Tanjiro and his sister Nezuko were only left after this tragic incident. Later both started becoming a demon slowly. Tanjiro sets out to become a demon slayer to cure his sister and avenge his family’s death. If you are looking for Demon Slayer on Amazon you can visit here.

The story follows Izuku Midoriya, a boy born without having superpowers, but he always dreams for that. Later he was trained by Japan’s greatest hero in a training academy (for Heros) and finally his dream became true when he became a real hero after getting Quirks.

It is based on Japanese manga series written and illustrated by Gege Akutami. A high schooler Yuji decides to hunt and swallows a cursed talisman – the finger of a demon and gets cursed himself. In order to locate the demon’s other body parts, he enters a school and exorcises himself.